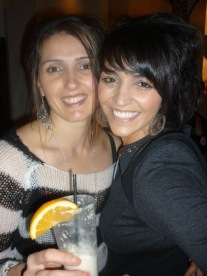 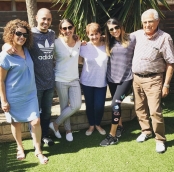 On the night of my fundraiser I mentioned 4 main reasons why I advocate and fundraise for MS. One of those reasons was for my family. Not many people know but my oldest sister Marie also has MS. When she was diagnosed she was 26 newly married and she was told she would never be able to have kids and that it was basically a death sentence. I clearly remember her diagnosis because the very next day at school coincidently we had people come out to talk to us about the MS read-a-thon. They showed us a video and all I remember was everyone being in wheelchairs and I walked out crying. Six years later I was also diagnosed with MS.

I have always mentioned in my journey that I fight hard for my family – especially my parents and this is why. The toll it took on my mum when she began to see similar symptoms in me that she saw in my oldest sister Marie were too much to handle and breaking point was when her worries were confirmed. Our family GP didn’t even want me to do an MRI because she was adamant there was absolutely no way I could have MS too however my mum is totally bad ass and demanded an MRI and that I be seen by a neurologist who specialises in MS.

When our fears were confirmed we were pretty numb – we felt like we were living out a horror movie although this is shit you couldn’t even write. This was a real life nightmare. I don’t have my own kids but I so deeply love my nieces and nephews like my own and the pain I feel when I hear they have been bullied at school or hurt themselves is so immense that I can’t even begin to imagine what my parents felt when Marie was diagnosed to then have the same blow when I was diagnosed. Could you imagine it? I can only imagine the questions a parent would ask – Did we do something wrong? Did we let them eat something wrong when they were kids? Did we expose them to something they shouldn’t have been near? Did I eat something wrong while I was pregnant? Was I a bad mum? What did I do for this to happen to them? My answer to any parent dealing with a sick child is that disease does not discriminate and you did absolutely nothing wrong!! Actually, you did everything right and most importantly you loved, cared and nurtured them so much that the only reason they will get by is because you did/do absolutely everything right and this was just unfair, bad luck.

This diagnosis has been like a two pronged sword it has caused our family extreme heartache but also made us closer than we ever thought we could possibly be. We are a tight unit but that also means when one of us is in pain we all are in pain. When I see my sister have another attack I know all too well what it feels like so I find it hard to pull myself together especially because she has two young boys and they don’t deserve to see their mum going through treatments and struggling to walk. My parents don’t deserve to have their kids bodies break down over and over and always be the ones to come and pick up the pieces. My other sister and my brother don’t deserve to always be on the back burner because their two other sisters are always sick and need help. And our husbands don’t deserve to carry the weight of the world on their shoulders.  No family deserves to see people they love sick and struggling and I no longer want to feel like the burden that causes people pain because I am in pain. This is why it is so important we rid this asshole of a disease that is so dam relentless, it never backs down and just when you feel like you’re getting your shit back together it quite literally comes back to haunt you and break your body apart again.

You see, this disease is invisible it doesn’t show you the pain it causes, the ravage to certain parts of the brain, the psychological mess it leaves you in and just how sneaky it can be. Although we are lucky and most probably won’t die from having MS we have been given a life sentence. A sentence that tells us you can manage this but you have to be able to go to battle every single day for the rest of your lives. That you mentally have to prepare yourself to take every blow and every set back. And that you could be the most positive person in the world but it will break every fibre of your being. I am lucky, because I have so many people to share my experience with, my hurt with, my good days and my bad days. I am lucky because my sister and I are a forced to be reckoned with, we will not ever back down to this disease and have each other and our family to keep us motivated to fight and be positive. But not everyone has that – this can be a very lonely sentence to live with and that is why I need to raise funds to keep MS programs running so no one feels alone in this sentence and for all the families that have to deal with the pain that is MS. I will continue to be confident that through money raised, research will continue to improve and one day we will say we have found a cure!!!

Thank you for reading…until next time…
Rania xoxox